On the second day in Morocco my friend Liz and I decided a day trip out of the city was in order. A lovely couple from our Riad decided to join us and I imagined a trip for just the four of us. I should have realised that for 200 dirham it wouldn’t be quite that exclusive!

We were taken by taxi to a petrol station near the Koutoubia Mosque, where we joined about 15 others on a minibus.

It was a nice trip but rather cheesy. We headed into the Ourika Valley.

Our first stop was at a herb/argan oil place. Although touristy, it was genuinely interesting and I bought Amber perfume, which I love (still haven’t quite worked out what Amber actually IS though!).

Onto our next stop, which was truly cringe-worthy. A beautiful Berber man guided us round a ‘traditional Berber house’. I don’t like being shown round people’s houses when I’m not a real guest. What need do I have of gawping at someone’s bedroom or storeroom? I was glad to leave simply because I felt it was a plastic experience.

We headed up the valley to go see some waterfalls. This was huge fun, with local daytrippers as well as international visitors.

Clambering ensued, to reach a small and then a larger (just) waterfall. They weren’t spectacular but it was fun watching our guide scamper around sure-footed as a mountain goat, helping everyone from slip-sliding middle-aged women to a five-year old girl. Moroccan men showed off by leaping from rock to rock, while women with high heels or backless slip ons tip-toed up and down, much to our amazement.

I have no photos, as they died in my memory card crash. Hot and thirsty, we tripped back to the city and headed for our rooftop haunt to watch the sunset and the world going about its business.

It was a touristy, fun day. I wouldn’t particularly recommend the trip we did but it’s a nice punctuation if you’re only going to be in Marrakech and want to see something else of Morocco.

Our third and final day started early-ish. The Majorelle Garden was top of my list of things to do as, along with the Ben Youssef Medersa, I had missed it last time. I had read that it’s super busy by 10 a.m. so my original plan was to be there for eight. That didn’t happen but thankfully it was still quiet when we got there at 9 am. I really would recommend being the first in, as by the time we left, it was getting busier.

You can read about the gardens here. It’s a gorgeous walled garden, filled with water features, the famous ‘majorelle’ blue at every turn and urn, and is delicious in its clever walkways and bowers.

It is also very difficult to photogrpah! Here’s my poorly attempts at capturing some of the delight. 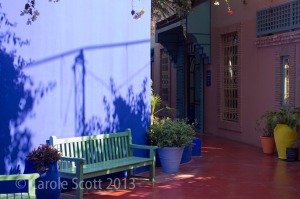 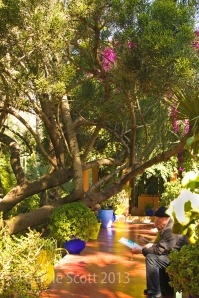 We returned to the square – well, it was time for coffee and, of course, more people-watching!

Next up was some actual shopping rather than simply ‘souking’ up the atmosphere. Liz wanted a rug. I didn’t, as there is no space for any more. We headed for the carpet section and I was immediately distracted by a cute little kitten.

Liz bought a rug and, inevitably, I did too! I have a high atlas one (traditional deep red kilim) but simply couldn’t resist the Berber colours and designs. 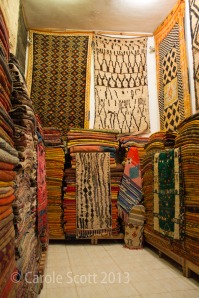 Once you have decided to buy a rug, it’s a hugely enjoyable process. The key to it is to start with a rough budget in your head. If you can afford to spend £100, for example, don’t go crazy and spend double the amount!

Choose your shop, accept a glass of mint tea, sit back and let the show begin. As many rugs as you want to see will be arranged in front of you. Then you narrow it down to two or three. If you don’t think they’re quite right, look at more until you stumble across ‘the one’, the rug that makes your heart sing.

Once you have it sight, start the negotiations, keeping hold of your budget and feeling confident that hard-bargaining on both sides is all part of the fun. If you can’t get down to a price you’re comfortable with, then be prepared to walk away.

But don’t walk away too early as a tactic!

I don’t know why I thought I would come away empty-handed. As Liz bought her big rug, I salivated over another that she had rejected. Alas, it was way outside my budget so I negotiated on a smaller one instead. We were all happy!

We couldn’t leave before trying out a traditional Berber wedding cloak! 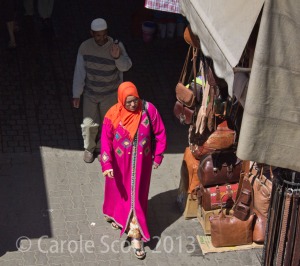 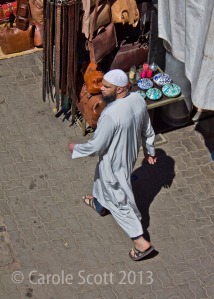 We wandered around and deliberately got lost. Now that we had done our essential shopping, we were happy just to discover. 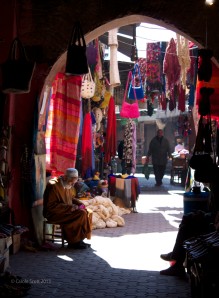 By this time we needed a rest. On the way back to our Riad, I took three of my favourite photos of the weekend.

Our pretty Riad was the perfect place for a rest.

Before we knew it, it was time for our final night in the Jemaa el-Fnaa. The food from the stalls is far more interesting than what we had eaten in restaurants and I only wish I hadn’t been so chicken before! 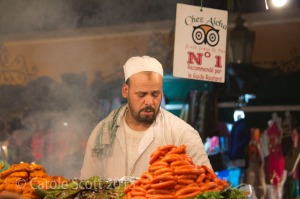 And so the long weekend drew to a close…back home to cold old Britain!

7 thoughts on “Marrakech: to the hills, the Majorelle Gardens and buying a rug!”

Please join in the conversation by leaving a reply... Cancel reply