Getting lost in the souks is an absolute must in terms of the Marrakech experience. To be honest, you probably won’t have a choice! If you do, then do just go with the flow. Worst comes to the worst – accept a tag-along ‘friend’ and pay them a bit to help you find your way again.

My friend Liz and I arrived at our Riad at about 8pm, so by the time we were ready to go out and eat, it was pretty dark. Armed with a hand-drawn map of the ‘short cut’ to the Jemaa el-Fnaa we set out. Within seconds we were confounded. I had been so laid back and ‘non preparing’ about the weekend break that I all I knew was that we were somewhere north east of the souks. Beyond that, I simply figured that we’d find our way with what the Riad staff provided us…should have known better as I’ve been to Marrakech before.

The alleyways around our Riad were straight out of the middle ages – dark, narrow and mysterious. At night, with lads lurking and eager to ‘help’, it could have felt dangerous. But do you know what? It just wasn’t. We smilingly shook off offers of help and found our way into the souks. At the northern end some were beginning to pack up for the evening. Eventually we stumbled upon the main artery, still packed with people at 9pm.

And out into the heaving, smoky square. The Jemaa al-Fnaa is a sensual feast. Musicians and story-tellers attract huddles of locals, keen to enjoy the evening’s entertainment. The smoke rising from hundreds of food stalls forms ever-shifting clouds, stinging the eyes and making the mouth water (and I’m not even a meat eater!).

I was a right old chicken on that first night, refusing to eat the street food in case my stomach rebelled. How foolish I was. It was the best food in the city, something I only found out on the last night. Take it from me, eating in the square offers the best choice, particularly if you’re a veggie who gets bored of unseasoned five-veg couscous and tagine after a couple of days!

Here’s some night time photos of the Jemaa el-Fnaa. 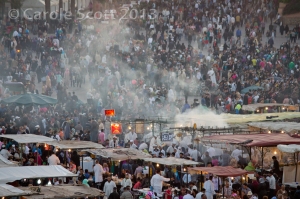 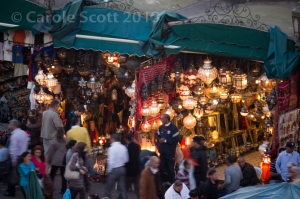 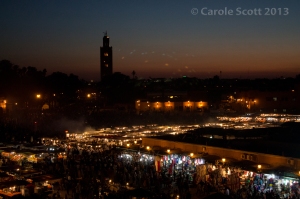 Tomorrow, it’ll be onto souks, sunsets and people-watching!

3 thoughts on “Marrakech: the souks and square at night”